This is part 1 of our 3 part series on the iconic Rolex Submariner.  You can find parts 2 and 3 here and here.

Please note the below is the result of personal research and represent my understanding of the history of one of the most sought after and copied watches of all time.  Though I believe it to be accurate, no guarantee is made, either expressed or implied, to its accuracy.

The first Rolex Submariner was introduced at Baselworld in 1953, the reference 6204.

It is characterized by a 37mm case, bi-directional bezel, caliber A260 movement, water resistant to 100 meters, a small crown at only 5.3 mm, and a black dial with gilt printing (though variations exist with a “honeycomb” finish.)  The “Mercedes” handset had not yet been introduced, with the 6204 carrying pencil hour and minute hands and a “lollypop” second hand.

The word “Submariner” may appear at the 12 o’clock position below Rolex or, as would later become the standard, at the 6 o’clock position though the depth rating was not yet stated on the dial.

Here we see the introduction of the “Mercedes” handset that would become the staple for the next 6+ decades.  Though not yet a “big crown”, the crown has been increased in diameter to 6.0 mm.

Perhaps the rarest of the standard production Submariner references, the 6200 carries the “Explorer” dial with Arabic numerals at the 3, 6, and 9 o’clock positions and introduced the red triangle at the 12 o’clock position on the bezel.  The waterproof rating has been increased to 200 meters, the crown to 8.0 mm, and it carries the larger A296 caliber. 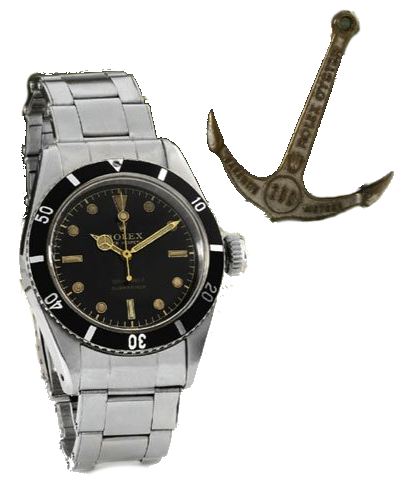 Replacing the 6204, it carries many of the features of the ref. 6200, including a 200 m / 660 ft depth rating (that may or may not be indicated on the dial at the 6 o’clock position depending on dial variant), a red triangle at the 12 o’clock position on the bezel, an 8.0 mm crown, and the “Mercedes” handset, though the diameter has been increased to 38 mm to accommodate the larger cal. 1030 movement.

There is also a ref. 6538 A variant, commonly believed to be a special version intended for military use.  Extremely rare, it is distinguished by neither “Submariner” nor depth rating indicated on the dial, and a stronger Group 19 “Tropic” plexiglass crystal.

The ref. 6536/1 variant is more common though virtually identical to the ref. 6536 with the exception of a slightly thinner case.  With the ref. 6536/1 we see some examples of a “tropical” dial, faded from the original black to a soft medium brown.

The ref. 5508 has multiple dial variants including an underline at the 6 o’clock position under “Submariner” and an “Exclamation” radium dot above the word “Swiss” at the 30 minute mark on the minute track.

A continuation of the ref. 6538, the ref. 5508 is characterized by a 38 mm case, 200 m / 660 ft depth rating (that may only be visible under magnification with the “Ghost” dial variant), an 8.0 mm crown, and the “Mercedes” handset, though some examples have lost the red triangle at the 12 o’clock position on the bezel and the movement has been upgraded to the cal. 1530.